VITAFILM® is a special blend of highly refined oils and natural compounds designed to penetrate deep into the molecular structure of the film base. This enables VITAFILM®'s unique ability to restore and condition damaged motion picture film.

In most cases VITAFILM® will cure vinegar syndrome when used as directed.

VITAFILM® is easy to use.

I have been a big fan of VITAFILM® ever since I started collecting 35mm prints back in 1970. In the process of using this remarkable product to preserve and maintain the pliability of my prints, I made an extraordinary discovery.

Everything Old Is New Again
My first experience with VITAFILM® occurred shortly after I purchased a 35mm IB Technicolor trailer of "THE MUSIC MAN". Apparently, the print had been stored under very poor conditions. It was so dry and brittle that it broke into pieces when I tried to unroll it. A friend suggested using VITAFILM® I soaked the roll as instructed for thirty days. Upon removal, I was delighted to find that it was now as flexible as a new print. It ran through my projector beautifully. After the success of that experience, I decided to make it a policy to treat each print with VITAFILM® before I added it to my collection.

Do You Smell That?
In 1983, I purchased a print of "THE KILLER SHREWS", a wonderfully bad sci-fi film from 1959. I noticed that the end of reel 3 would not stay in focus when I projected it, even though the rest of the reel ran perfectly. Upon inspection, I found that particular area of the film to be warped and slightly distorted causing the focus problem. The section also smelled funny. It had a strange odor that reminded me of the acetic acid I had once used in my home darkroom. It did not dawn on me that the two symptoms could be related. I assumed that the previous owner must have spilled something on the print. After treating the reels in VITAFILM®, I put them in my vault and forgot all about them.

It Can’t Happen to Me
A few years later I began to hear rumors of something called "Vinegar Syndrome" or "Rot" in which acetate film would decompose in a manner similar to the old nitrate film. As the chemical breakdown of the film accelerates, acetic acid forms emitting a strong vinegar-like smell, ultimately twisting, and distorting the film base causing focus problems. Although there is no fire or explosion hazard as with nitrate stock, in the end the film is rendered just as useless. Years earlier, I had read that acetate prints were supposed to have a shelf life of as much as 300 years, so the whole vinegar issue puzzled me. Since, I believed none of my collection was effected, I dismissed the whole thing and concluded that as long as I continued to store my beloved prints carefully, all would be well.

The Test of Time
Five years after my initial viewing of "SHREWS", I ran it again. The print was fine in every way except the end of reel 3 still went in and out of focus. I remembered that strange smell-it was gone. Then it hit me: the print must have had vinegar rot five years ago, but showed no signs of it now because VITAFILM® must have arrested it. Could this be true? I retraced my steps. All of the reels had been stored in the same shipping can. If my information on vinegar rot was correct, my entire print should have been ruined. On the contrary, the can smelled fine. All the reels smelled fine. Clearly, the "rot" had not spread throughout the print during its long hibernation. The Shrews were alive and well, thanks to VITAFILM® I was thrilled. I mentioned my astonishing discovery to several people, but no one realized its potential value.

A Liquid Asset
As time went on, I purchased more prints and sure enough, eventually I acquired another one that showed early signs of Vinegar Rot. I soaked the print in VITAFILM® and put it away for six months. When I checked it again, it was perfectly fine - no vinegar smell at all. Over time more and more newly purchased prints needed treatment and VITAFILM® always came to the rescue. I used it on every print I bought no matter what its condition, knowing that VITAFILM® would preserve it. I remember thinking, "What would I do without this stuff?"

All Good Things Come To An End
In 1988, I heard the rather upsetting news that VITAFILM® was no longer being manufactured. The editorial supply houses quit carrying it. After many phone calls, I was able to buy a few cans from local camera shops, but that supply was quickly exhausted. I was able to purchase a few more precious gallons from another private collector. But as time went on, the well ran dry. I had to ration what little I had left. As vigilant as I was, there just wasn’t enough to go around. Some of my favorite films were lost to Vinegar Rot.

What Now?
With my supply nearly gone, I tried every film cleaner I could find, but none of them even came close to meeting my needs. I began to realize that there simply was no substitute for VITAFILM® I decided to do research. I read as much information as I could find about Vinegar Syndrome hoping someone had found a cure. No luck. Even the makers of acetate film had concluded that once a roll of film was infected, be it Release Print or Original Camera Negative, total decay would soon follow. Their advice was the same in this case as with decomposing nitrate: copy the material as soon as possible onto Estar-based film. That’s easy to say, but astronomically expensive to do. The only product offered was "molecular sieves", which slowed the process, but couldn't stop it. There had to be another way.
I had a small vial of VITAFILM® analyzed professionally in hopes of discovering the components of the magic formula. No luck. I attempted repeatedly to formulate my own version. Total failure. Things were looking pretty hopeless.

Every Cloud Has A Silver Lining
The last resort became clear: go to the source. I wanted to track down the owner of the formula and persuade him to let me make it myself, or sell me whatever quantities he might have lying around. I was willing to try anything. I had nightmares of watching helplessly as my whole collection slowly rotted away. It took several months, but I did finally locate him. One thing led to another and now I am happy to report that I own the VITAFILM® Company. My collection is safe at last. This wonderful product is available again to film lovers everywhere. 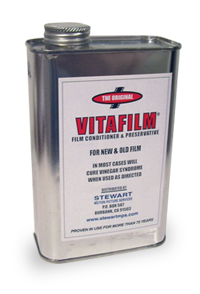